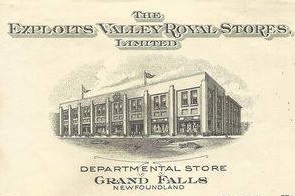 It is getting close to Christmas. For more than half a century this would have meant a trip to the Royal Stores, to check out the elaborately displayed Toyland that was put out every year. The Exploits Valley Royal Stores was a Central Newfoundland Institution and at one time one of the biggest employers in the region. Everybody knows somebody or somebody belonged to somebody that worked at the Royal Stores.

The Royal Stores Ltd. Was founded in the late 1800’s in St. John’s through a partnership between the MacPherson and Job families in St. John’s. The MacPhersons would eventually become the dominant parties in the business.

Grand Falls was a company town and in the first six years the A.N.D Company was in operation they had a company store. The first two company stores were located on present day Lincoln Road near the Workers Memorial. The first company store was actually in a log building!

In 1911 the A.N.D decided to contract out their store to the Royal Stores of St John’s and the Exploits Valley Royal Stores was formed. Initially there was a store at Grand Falls and another at Millertown. The first location in Grand Falls was at the lower end of high street near present day Riverside Convenience. This was an ideal location since at the time most of the townspeople lived in the Circular Road area. The Millertown Store was located initially in the one of the sawmill buildings erected by Lewis Miller in 1900-01.

You might be curious as to why the Royal Stores needed such a large location in such a small town. Though the population of Millertown was 2-300 people as many and 3000 different loggers came through the area on their way to the camps on Red Indian Lake. That would be 3000 potential customers looking to bring a little something back to their families in the outports. After the mines started in Buchans a branch was opened there as well.

The Exploits Valley Royal Store was a true department store selling dry goods, furniture, hardware and groceries. Back in the old days most of the groceries in town were delivered to peoples homes. This was initially done by horse and cart and the EVRS employed a number of teamsters. The MacPhersons were of Scottish Extraction and this was reflected in their management. Mr. Alexander Ogilvie, long-time manager of the EVRS was originally from Scotland.

The Royal Stores had a special place in the company town, it was one of the first businesses allowed to operate in Grand Falls. It was also a big employer and many people had their first jobs there. They were also one of the few entities besides the A.N.D Company to own houses and property-which it rented to its employees.

My conclusion that the Royal Stores was at one point the second or third biggest[i]employer in town is because of the connections that people make with it. Mention a name-they probably worked for either the mill or the Royal Stores, or their father of Grandfather or Mother worked for the Royal Stores. Offhand I can think of people I know or knew and name their connection with the royal stores. Heber Hiscock-who did many of the signs for the stores and worked there for a very long time; Ralph Cook Sr. worked as a butcher there, Wilfred Mouland worked there for many years and these are just the relatives of people that I know! Not to mention all of the people who had their first job there as a teenager. The number of people the EVRS employed at its peak is unknown, but I do know that in 1950 the Royal Stores employed 83 people. A far cry from the 1000 plus in the mill at the time, but who else employed more people?

Besides the people and the toy display at Christmas one of the things that always comes up when somebody mentions the Royal Stores is the cash carrier system. When a sale was made the money was sent along this suspended system of tracks to the office. Cash carriers of this type were once quite common but I am sure that many children were in awe of the one at the Royal Stores.

As mentioned before the original location of the Royal Stores was at the bottom of High Street. By the 1930’s it had outgrown this location and moved to a new more modern concrete and brick construction on the upper end of High Street Across from the town hall. This new store opened in 1936 and in it you could find just about anything.

From 1936 until the 1970’s the new Royal Stores was the anchor store for high street. When people reminisce about the glory days of High Street, before the mall, the Royal Stores was where people did their shopping.

There was completion, but for years the main competitors to the Royal Stores-mainly Cohen’s and Riff’s, were located in Windsor. It is not like today when everybody has a car and it takes five minutes to get from one end of town to the other. To get from High Street to Main Street by foot was quite the trek, unless you wanted to take the bus! Competition to the Royal Store on High Street would arrive. The earliest competitor was the Cooperative Society (The Co-Op) which set up shop in the early 1920’s and sold most of the same products. More competition would come in the second half of the twentieth Century when Bowring’s and the Bay opened up across the road.

The glory days of the Royal Stores and of High Street came to an end in the 1970’s when the Exploits Valley Mall opened up in 1974. For a time the Royal Stores operated in a scaled down form in the mall after having left downtown. But it’s, like most of the other Newfoundland grown department stores days were numbers. By 1977 the Royal Stores across Newfoundland ceased operations. The influx of Canadian and international chain stores like Woolworths, The Hudson’s Bay and The Met were too much to compete with. By the late 1970’s the Royal stores ceased operations, not just in the Exploits Valley but across Newfoundland.

The old Royal Stores Property was sold to the Sobeys Grocery Store chain, who operated their grocery store from the location on High street for close to twenty years. Eventually Sobeys moved out on Cromer Avenue next to the mall and the old Royal Stores building lay vacant. It was torn down and all that remains is a dirt parking lot.

The memories among generations of Central Newfoundlanders remain and I can bet that many of you  can put their hands on something bought at the Royal Stores.

[i] Initially I was sure that it was the second biggest employer until J. Goodyear and Son’s came to mind, the Royal Stores still may have employed more people in the town of Grand Falls.